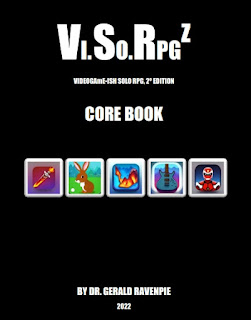 (You need the three first files above, you should also get the fourth, and there's no reason to not get the rest. They're all free, after all!).

VISORPG was the result of an experiment: as explained in the game’s introduction, I had known about ‘solo’ RPGs from a long time, but I always had found that concept a little strange…so I never dared to give them a try. Cue 2022, and as one new Year's resolutions I decided to make that try, after all! And I decided that because the concept didn’t sound so strange to me once I started visualizing me as playing that kind of game as an adventure/RPG/visual novel videogame...without computer, console or whatever. On the other hand, I didn’t know about any already existing solo RPG which worked in such way…and, nevertheless, I was interested in trying a very specific kind of story, so I decided to homebrew my own system. And, at the end, writing the rules turned out into part of the game, so I started putting them in a somewhat readable format. The key word here is 'somewhat': wrote the game in English...which isn't my first language.

[Yeah, a solo RPG which was initially thought for just my own use, and I didn’t use my first language. Go figure.]

Now, fast forward a few months: in September 2022, I started writing a new version of the game, with plenty of changes…but keeping most of its essence. Ah, yeah, and most of the material that was already writing because I didn’t want to reinvent the wheel! Cue November 2022…and here there is, the second edition of the game: VISORPG Z!

In VISORPG Z you’ll find rules for playing a solo RPG story, taking plenty of inspiration on how videogames work and also screening plenty of lists of tropes for different genres.

1) Rules for character creation, from the game Main Characters to the 'just being there' Bystanders.

4) Rules for Action resolution. Yes, that capital 'A' is important. You can resolve dramatic conflicts, tense investigations, mecha combats, etc., with them. Also, fishing, home furnishing and game-card collecting, if that's your thing!

6)  AI generated art...or maybe AI generated not-art (the jury is still out). A million times better than what I could have made by myself...but still far worse than what I surely could have got I my computer specs were not in the bare minimum (let's just say that cherry tree has few cherrys to cherrypick from).

Here there is a list of the main changes you can find in this second edition of the game.

First release. With quite the offenders in the mistakes department, as seen below!

Here there are the offenders, but also the welcomed (?) changes and additions.

Here you'll find the links for all VISORPG-Z files. Again. Just in case.

Here you'll find the links for all the first edition material, just for keeping the legacy and stuff.